All legal entities must register the natural person(s) who qualify as UBO or Pseudo-UBO ultimately on March 26, 2022. Failing to comply with this on time is an economic offense. For the avoidance of doubt, the abovementioned does not apply to trusts and similar legal structures in the Netherlands. The implementation of the legislative proposal with regard to the UBO registration for trusts and similar legal structures is currently still in process.

In short, all natural persons must be registered who have control over the entity by:

(i)        (in)directly holding more than 25% of the interest as shareholder, holder of voting
rights or holder of economic interest; or

Listed (European) private or public limited liability companies that are subject to disclosure requirements consistent with Directive 2013/50/EU or subject to equivalent international standards which ensure adequate transparency of ownership information (such as UK, US, Singapore, Canada and Australia) are exempted from the obligation to register their UBO(s). The exemption also applies to all legal entities that have a 100% relationship with an exempted listed company.

According to the note on the report on the bill (Dutch Senate, session year 2019-2020, 35 179, C p.4), this exemption does no longer apply if the company structure is organized in such way that there is not a 100% (in)direct relationship with the exempted listed company (for example because it has two shareholders) even if it forms part of the same structure (see ’D5’ in the below example).

Example exempted listed company / pseudo UBO for a not 100% subsidiary 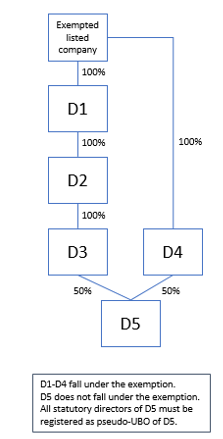 Although the situation above was most likely not been provided for at the time the exemptions where defined, it is advisable to do a UBO registration for D5 after all in order to avoid being accused of an economic offense.

For more detailed information with respect to the UBO registration, we refer to our previous alerts on this topic: https://vancampenliem.com/blog/the-implementation-of-the-ubo-register/.

If you need any help with the registration of the (pseudo)UBO(s) at the Dutch trade register or the determination of the UBO within your organization, we are happy to assist. In case you have any questions in relation with the UBO register or require assistance, please do not hesitate to contact us.

On 22 December 2021, the European Commission presented a proposal for a new EU Directive introducing additional substance guidelines tackling the abusive use of so-called ‘shell-companies’ (ATAD 3 Proposal). The draft EU Directive will now move to the negotiation phase among Member States (through the Council) requiring an unanimous vote by all 27 Member States in order to be adopted as new EU legislation.

In addition, on 1 January 2022, the so-called Reverse Hybrid Rule (RHR) entered into force in Luxembourg. Under the RHR, Luxembourg tax transparent entities or arrangements can be requalified as corporate tax payers and become liable to corporate income tax.

ATAD 3 Proposal introduces an EU-wide ‘substance test’) which is targeted at entities established in EU Member States deriving more than 75% of their income that qualifies as investment income or passive income (notably, interest, royalties and dividends), which are mainly involved in cross-border activities and whose daily management and decision-making is outsourced. Entities falling within the scope of ATAD 3 will be subject to a specific reporting obligation and, under certain circumstances, will not be able to obtain tax residence certificates issued within the meaning of tax treaties signed among EU member states.

If adopted, the ATAD 3 Proposal would need to be transposed into the Member States’ national law by 30 June 2023 and become effective as from 1 January 2024.

There are a number of specific exclusions to the above rule, most notably (i) certain regulated financial companies such as UCITS, AIFs, AIFM, etc., (ii) companies with transferable securities listed on a regulated market and (iii) companies with at least five full-time employees carrying out the activities which generate the relevant income. In addition, a company that meets certain criteria may request an exemption from its reporting obligation if it can provide evidence that its existence does not reduce the tax liability of the beneficial owner(s) or of its group. This exemption is granted for one year and can be extended up to five years.

Entities which qualify as “reporting entities” under ATAD 3 will have to declare in their annual tax return, for each fiscal year, whether they meet certain indicators of minimum substance. All information reported on the minimum substance indicators must be accompanied by documentary evidence.

The main tax implications for entities deemed to lack minimum substance (and which are unable to rebut the presumption of lack of substance) (Shell Companies) are as follows:

On 1 January 2022, the so-called “Reverse Hybrid Rule” (RHR) within the framework of the Anti-Tax Avoidance Directive (EU) 2017/952 (ATAD II) and as implemented in Luxembourg with the law of 20 December 2019 entered into force in Luxembourg.

The RHR applies to Luxembourg tax transparent entities (i.e. Luxembourg partnerships, such as société en commandite simple (SCS) or société en commandite spéciale (SCSp)) or arrangements established in Luxembourg, if one or more non-resident ‘associated enterprises’[1] hold, directly or indirectly, globally at least 50% of the voting rights, capital ownership or profit entitlement in such entity and qualify the entity or arrangement as a corporate taxpayer (i.e. tax opaque entity) (Reverse Hybrid Entity).

For the purpose of assessing the ‘associated enterprise’ threshold for investment funds[2], an investor may be deemed as ‘acting together’[3] with other parties to the extent that he holds together with other investors 10% or more of an aggregate interest of voting rights or capital ownership or profit entitlement in the Reverse Hybrid Entity. Thus, investors holding a participation of less than 10% in the transparent entity or arrangement should be deemed not to act together, unless proven otherwise by the Luxembourg tax authorities.  Investors holding a participation equal to or more than 10% may be deemed to act together (a case-by-case analysis must be done) and the burden of proof lies with the entity. The 10% threshold has to be assessed by transparency of all intermediary investment funds or vehicles up to the ultimate investors who may be regarded as payee from a Luxembourg tax perspective, i.e., up to any entity regarded as opaque from a Luxembourg tax perspective or any individual.

Nonetheless, an exemption to the RHR applies to Luxembourg collective investment vehicles (CIV), which are widely held, hold a diversified portfolio of securities and are subject to investor-protection regulation in their country of establishment. In that respect, any Luxembourg collective investment vehicle subject to the law of 17 December 2010 on UCI, the law of 13 February 2007 on SIF or the law of 23 July 2016 on RAIF should be considered as CIV while alternative investment funds (AIFs) not subject to any of the above-mentioned laws, but which are covered by the law of 12 July 2013 will be considered as CIV only to the extent that they are widely held, hold a diversified portfolio and are subject to investor-protection regulations (AIF Exemption). So far, the scope and application of this AIF Exemption is still subject to further clarification by the Luxembourg tax authorities and a circular is expected to be issued by the Luxembourg tax authorities this year.

If the RHR applies, Luxembourg tax transparent entities will be treated as corporate taxpayers and become liable to corporate income tax (CIT) to the extent that any income derived by such reverse hybrid entity is not taxed elsewhere.

The possible impact of the RHR to any investment funds which are incorporated as a Luxembourg tax transparent entity should be addressed in its constitutive documents in order to minimise the impact to the overall group of investors and provide that the general partner has the flexibility to allocate the possible impact of ATAD II to the specific investors causing it.

The ATAD 3 Proposal introduces stricter substance requirements for companies located within the EU as a further step within the framework of the reform project set out by the Organisation for Economic Cooperation and Development (OECD) to tackle aggressive tax planning. It remains to be seen whether the draft EU Directive will be unanimously approved by all 27 Member States in the Council. In the meantime, companies should continue to focus on fulfilling all substance requirements currently in place and monitor the further developments around ATAD 3.

With respect to the entry into force of the RHR, we recommend to monitor and ensure that Luxembourg tax transparent entities or arrangements will not fall in the scope of the RHR and potentially cause additional tax leakage.

Feel free to reach out to our tax team should you have any question or require any assistance.

[1]     As a reminder, for the purpose of the RHR, any investor (or shareholder) falling into one of the following categories qualifies as ‘associated enterprise’ if:

(i) he holds directly or indirectly a participation of at least 50% in terms of voting rights or capital ownership in the tax transparent entity, or is entitled to receive at least 50 % of such entity’s profit;

(ii) he is part of the same consolidated group for financial accounting purposes as another investor;

(iii) he has a significant influence in the management of the tax transparent entity.

[3]     There is no clear definition of acting together under ATAD II, hence a reasonable approach would be to align with the broader definition given by the OECD BEPS Project. In that case, an investor is deemed to act together if:

Under Luxembourg law in the context of investment funds the mere fact that the investments made by the fund are managed by the same person being the general partner, the AIFM or any other appointed manager does not as such involve that investors in such investment funds are automatically considered as acting together with respect to the fund and the underlying investment.

By subscribing for our newsletter you provide your explicit consent to receive our communications and thus that we may process your contact details for this purpose and solely to the extent required for these communications. We will handle your data with due care as further described in our Privacy Statement. You can find our Privacy Statement here: https://vancampenliem.com/privacy-statement/
Accept
We use cookies on our website to give you the most relevant experience by remembering your preferences and repeat visits. By clicking “Accept All”, you consent to the use of ALL the cookies. However, you may visit "Cookie Settings" to provide a controlled consent.
Cookie SettingsAccept All
Manage consent

This website uses cookies to improve your experience while you navigate through the website. Out of these, the cookies that are categorized as necessary are stored on your browser as they are essential for the working of basic functionalities of the website. We also use third-party cookies that help us analyze and understand how you use this website. These cookies will be stored in your browser only with your consent. You also have the option to opt-out of these cookies. But opting out of some of these cookies may affect your browsing experience.
Necessary Always Enabled
Necessary cookies are absolutely essential for the website to function properly. This category only includes cookies that ensures basic functionalities and security features of the website. These cookies do not store any personal information.
Non-necessary
Any cookies that may not be particularly necessary for the website to function and is used specifically to collect user personal data via analytics, ads, other embedded contents are termed as non-necessary cookies. It is mandatory to procure user consent prior to running these cookies on your website.
SAVE & ACCEPT
↑